ACC Story Archives: A Chinese Archaeologist in the Wild West

An Jiayao is one of China’s top archaeologists and a leading authority on ancient Chinese glass and on Western glass found in China. For over twenty years, Ms. An led an archaeological excavation team working on a vast Tang dynasty palace site in Xi’an, formerly the Tang imperial capital. She was awarded an ACC fellowship in 1988 to conduct further research on the world history of glass in the U.S.

ACC Story Archives: A Chinese Archaeologist in the Wild West

My history with the Asian Cultural Council can be traced back to 1987. At that time, China’s doors were only just opened to the world and cultural exchange with foreign countries was the deepest desire of any scholar. That year, Professor K.C. Chang of Harvard University came to visit Beijing and I discussed with him my idea of travelling to the United States for observation. Professor Chang suggested that I apply for sponsorship from the Asian Cultural Council (ACC), and this became my first contact with ACC.

In the summer of 1988 I was awarded a grant from ACC. My husband was a visiting scholar at the University of Michigan then and I was in Ann Arbor to visit my relatives. With this grant I decided to partake in an American archaeological field excavation. I learned from a university magazine that the University of Idaho was assembling a team to excavate the Chinatown of Silver City, Idaho. They were looking for individuals who had knowledge of Chinese artefacts and so I signed up.

I packed a light suitcase and took the Greyhound bus to travel over half of the United States and reach the excavation site. Silver City is a former Gold Rush town located on the Rocky Mountains. During the Gold Rush, a group of Chinese people who originated from Guangdong province in China came to this town to work menial jobs like fetching water, laundry and operating businesses like gambling. At a later period the Chinese faced discrimination and exclusion in the state of Idaho and were forced to leave. The excavation in 1988 was then a part of the reflection on Gold Rush history that was being conducted by a group of American scholars. 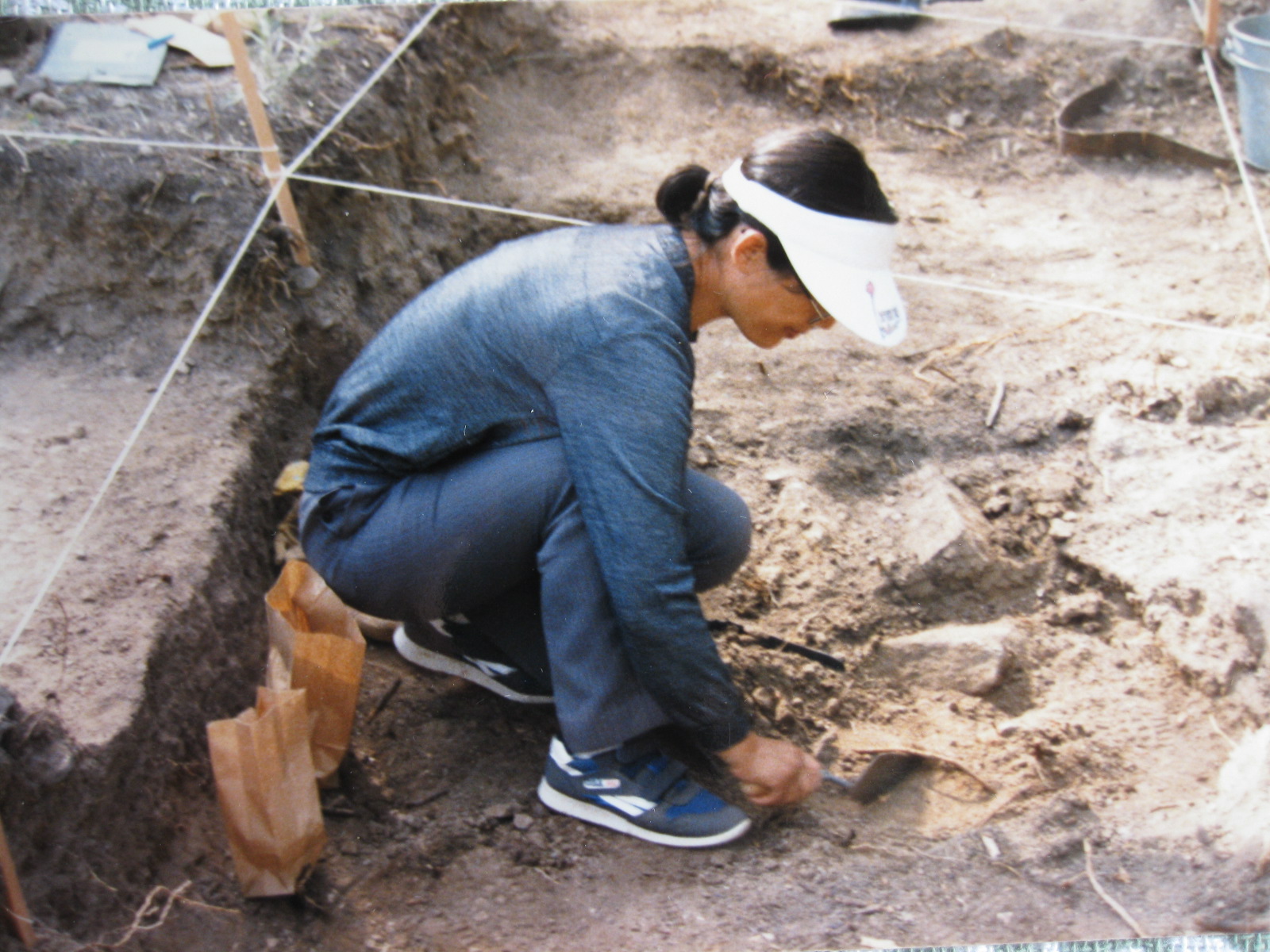 An Jiayao on her excavation in Idaho

The three-week long field excavation left me with an unforgettable experience. It was summer in the Rocky Mountains, the scenery was captivating and the landscape was covered with wild flowers in bloom. We camped on the mountain and grazing cows often visited us at our tents in the morning. At night the sky was the deepest blue and overlaid with a multitude of stars. Those stars were the brightest and most numerous that I have ever seen in my life.

Other than students from the University of Idaho and students from other American universities, a few other members of the excavation team were retired teachers and civil servants. Field excavation is a very difficult task. My American colleagues were tough and perseverant; they were professional and on par with Chinese archaeologists, which was beyond my expectations. It was incomprehensible to any Chinese person at the time that those retired teachers and civil servants would put themselves through the grueling experience of excavating simply because of their interest in archaeology.

I was the only archaeologist from China on the dig and so I received everybody’s care and attention. The temperature would reach 100 degrees Fahrenheit during the day in the Rocky Mountains but drop significantly during the nights. An elderly American couple saw that my sleeping bag was very thin and drove down the mountain to their home to bring me a thick blanket. It still warms my heart when I think about that blanket now.

The dates of our excavation coincided with a three-day cowboy gathering. Cowboys from California and other places brought their family members to Silver City for the gathering and enlivened the atmosphere of our camp grounds. Our team leader, Professor Roderick Sprague advised that we should not stay too close to the cowboys out of his concern for our safety. But it was the first time that I had ever seen cowboys and so I wanted to understand their lifestyle. One of the retired civil servants and a Vietnam War veteran graduate student shared my interest and joined me for the parties thrown by the cowboys. We tasted barbeque, heard country music and experienced their energetic dance socials. The cowboys were wild in demeanor but were really kind-hearted. They heard that I was from China and they were very friendly towards me.

Mobile phones were not yet popular at that time and communication was difficult. Moreover, Silver City is a summer camp ground and so the area did not have many permanent residents. There was just one telephone installed in a bar on the camp grounds and our communication with the outside world depended on it. One day Professor Sprague received a phone call from New York at the bar. Sarah Bradley from ACC was probably worried about me being alone in the ‘wild west’ and called to ask how I was. The professor conveyed Sarah’s sentiments to me and I was deeply touched.

After returning from Idaho I went on a month-long internship at the Corning Museum of Glass which was also supported by my ACC grant. Glass is not a unique invention of ancient China and neither was it one of China’s main handicraft products. Western glassware that was traded into China via the Silk Road was always viewed as precious items by ancient nobility. My internship at Corning was extremely important to my academic studies. Corning is a tourist town and it was difficult to find cheap lodging. A week after my arrival the secretary of Dr. Robert Brill, a specialist in museum sciences, Maxine Smith suggested that I should stay at her house and get a lift to and from the museum with her every day. I immediately agreed and offered her my living expenses as recompense. 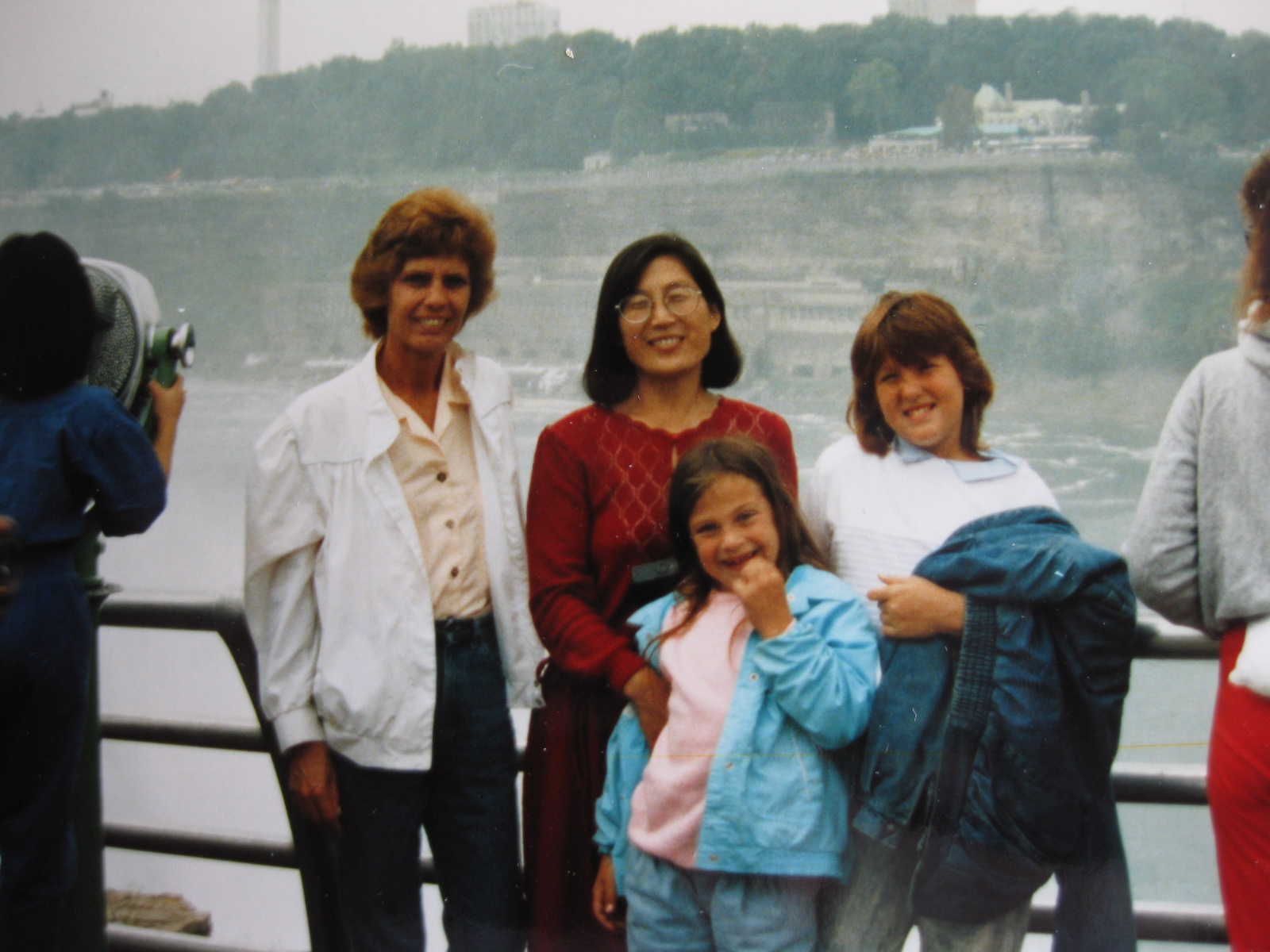 An Jiayao with Maxine Smih and her two children

Maxine was a single parent who had three daughters who were attending primary school at the time. They lived in Lawrenceville, Pennsylvania and the three weeks that I spent with Maxine and her family was absolutely unforgettable. My understanding of America used to come from movies. I thought that everybody was wealthy and without any worries. Maxine was not wealthy but she was optimistic and looked to the future. Her three children were very independent and that is something that is rarely seen in China. We would return from work at Corning and the children would have had dinner prepared already.

Lawrenceville is a typical ‘white’ town. The town only had a church, a petrol station with a convenience store and a bar. The calendar that hung in Maxine’s home was marked with the birthdays of all the town residents. As I may have been the first Chinese guest that this town had ever seen, Maxine made a special effort to take me to the bar after dinner and introduce me to the locals. I was even invited to attend the town council meeting by the mayor.

The town secretary requested to spend USD $400 on a new typewriter at the meeting and was rejected. This kind of transparency in terms of management and democracy left me with a deep impression. Cultural exchange is truly two-directional. The residents of the town were very interested in China and they asked me many questions. One day, Maxine’s brother approached me with a map of China to discuss the 56 ethnic minorities of China. I said that he should come to China to see it for himself but he said that it was unsafe to travel anywhere in the world except the U.S. and Canada. Actually, it was probably safer to travel to China back then than it is now.

Before I left town I invited Maxine, her family and the mayor for a meal at a Chinese restaurant in Corning. I requested authentic (non-westernized) Chinese food from the chef of that restaurant. Maxine’s three daughters had never had Chinese food before and were extremely excited. When the fish arrived at the table, two of Maxine’s daughters screamed in horror and asked why it still had its head and skin. They refused to eat a fish cooked whole and would not allow us to even put the dish on the table. It was at that moment that I realized that there was a long road ahead of the mission of getting the world to understand Chinese culture.

In March 1989 I returned to China and continued to pursue my passion for archaeological excavations and study of ancient glass. Over the past 20 years I have been active in the international academic forum and have instilled internationally successful ideas and methods into the preservation of Chinese cultural artefacts. I know that my achievements and my experience in America under ACC sponsorship cannot be separated from each other.