Huang Weikai is an ACC grantee and a documentary filmmaker whose work presents the struggles and realities of modern urban life. His 2009 work, Disorder, was an official selection at more than ten international film festivals and it received the Young Jury Special Mention Award at the 31st Cinéma du Réel International Documentary Film Festival in France. Set in the chaotic metropolis of Guangzhou, the film is a collage of street scenes which reflect how urbanites adapt to bizarre realities. He was awarded an ACC grant in 2010 to conduct research as a visiting scholar in the Department of Cinema Studies at New York University and to meet with other professionals in his field.

Before I left China on my Jackie Chan Fellowship program, a friend turned to me and asked: "Why are you traveling all the way to New York just to work on a script based on a Chinese topic?" This was the conversation that came to mind when Michelle Vosper wrote to me for a report on my ACC trip abroad.

Thinking back, the situation was very different in the past when I needed to create a film at home. First, I had to see how much money I had left in my savings account, since it would determine how much time I could spend on my project. If I did not have enough money in the bank, I would have to try to quickly make some money, but then other troubling matters would emerge and I would become torn between time constraints, the need to create, and the need to make a living. Because of this, the time that I spent in New York remains, to this day, as one of the best experiences in my creative career. 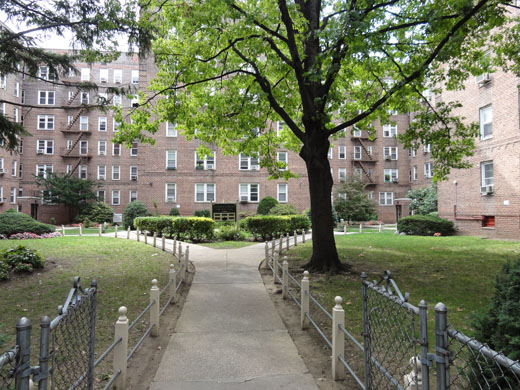 The apartment that ACC provided was situated in New York’s Queens Borough. I had an apartment that was approximately 70 square meters in size on the fourth floor of a building. It had a private bathroom, a kitchen, and a spacious living room. One end of the room became my studio and the other functioned as the living room. The window by my desk looked out upon the central garden of the residential area. Every morning, the first ray of sunlight would shine through the apartment, into my bedroom and fall just above my bed. My first thought every day as I was just about to wake would then be: “Oh, this is the start of another amazing day”. 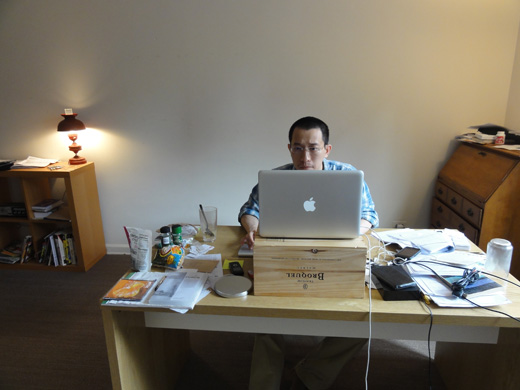 Huang Weikai working in his apartment

In fact, when someone who is filled with the desire to create is fortunate enough to receive a grant, creating becomes completely natural since the crushing pressure to make a living is removed. In this fully-furnished apartment, the rhythms of daily living and artistic creation were within my control and I was free to write or conceive my next film project—and even to daydream. Out on the shores of the North Pacific Ocean, I actually had greater clarity in my mind’s eye about the state of things at home. As I recall, I was almost completely uninterrupted during my stay there, except for this one time when someone knocked on my door to ask if I wanted to purchase a Bible.

Other than a comfortable apartment, ACC also kindly contacted the New York University Tisch School of the Arts Department of Cinema Studies on my behalf. This professional platform for discussion was of great benefit to me. Firstly, as a Visiting Scholar I was able to attend classes that I was interested in, learn, and also exchange ideas with professors at the university. The film events held by the department also widened my network of exchange and I was able to meet many local artists. Resources available at the school were an additional convenience for me since I was able to use their library and audio-visual rooms as well as attend their weekly screenings of silent films for research. 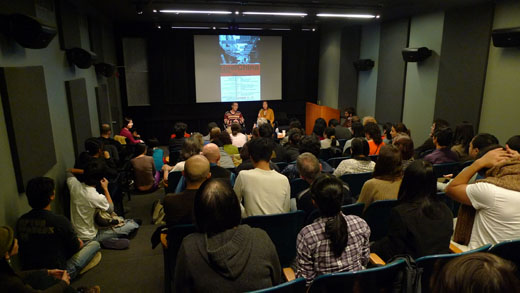 Yet it was not as if I was only working like a hermit in my apartment or soaking in the academic atmosphere of New York University. The great big world was right beside me: the vibrant and exciting city of New York. I was basically free to travel between these three different experiences, these three different ‘worlds’. The city often has opening ceremonies for cultural events of all sizes and you can watch all kinds of movies. There are a variety of museums and these arts institutions not only broadened one’s cultural horizons but also constantly stimulated my artistic senses. 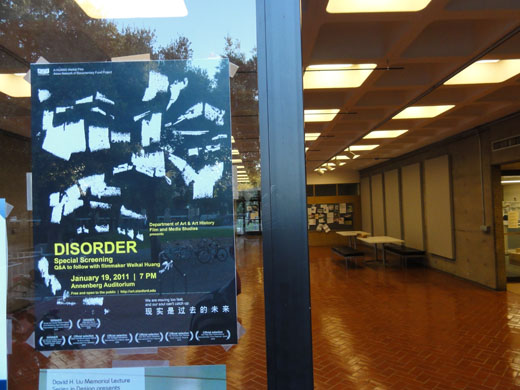 A poster for the screening of "Disorder" at Stanford University

Yet the most fantastic thing was that I was not just a passive observer but that I was actually a part of it. Apart from my screenings at New York University, I was also invited to screen and speak about my documentary films at Stanford University, Rice University, University of Florida, Museum of Modern Art (New York), Museum of the Moving Image (New York), and the Asia Society and Museum. At these screenings, my interaction with different American audiences was also exciting element for me. Regardless of criticism or praise, those experiences have allowed me to gain further insight into my work and the cinematic tastes of the American audience.

All in all, I feel as if all these experiences came together and became for me a 'virtuous cycle': I would study and learn on one side, receive feedback on my previous works from the audience on the other side, and all the while I would be developing my new works. Just as I was about to leave, I received news that the film project that I had developed during my time in New York was invited to take part in the Cannes Film Festival L'Atelier, which is organized by the Festival's Cinéfondation "to inspire and support the next generation of international filmmakers".