Chinese Ink: Then and Now

For many artists in Asia, the word "globalization" is merely a euphemism for the onslaught of western commercial imperialism which threatens their local cultural uniqueness and identity. The tension caused by the east-west collision and tradition versus modernity is a frequent theme in contemporary work.

Yet immersion in another culture with time for quiet observation and deep reflection, and exchanges of ideas with local artists, usually results in an unexpected consolidation of one's one identity. The mission of the Asian Cultural Council is to provide this kind of educational experience for the Asian artists whom they support through cultural exchange research programs in the U.S. 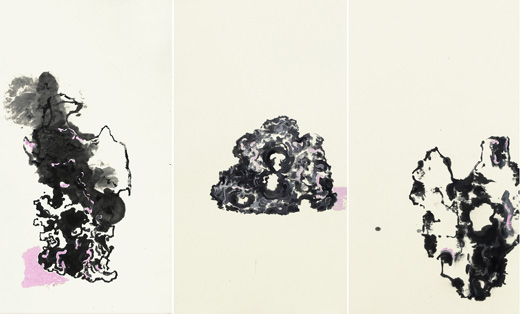 Zhang Jianjun received an ACC fellowship in 1987 to make his first trip abroad. He was then the Vice Director of the Shanghai Art Gallery and a recent graduate of the newly established fine arts department of the Shanghai Theatre Academy.

“The Chinese have an expression that goes: 'You can see the mountain better from a distance ',” explained Zhang in a recent interview. "Going abroad gave me a new perspective on my own background."

The exhibition is co-presented by Alisan Fine Arts which is celebrating the thirtieth anniversary of the gallery which was established in 1981 to present work by contemporary Chinese artists.

All three artists in the exhibition create in the traditional medium of Chinese ink and brush and are seeking a contemporary expression for this ancient art form. They also share the experience of spending an extensive period time in the U.S. on Asian Cultural Council programs. The exhibition juxtaposes works created before their travel abroad together with new pieces from 2010 and 2011. The experience has been transformative for all of them.

Before going abroad, Zhang Jianjunwas already beginning to combine ink with acrylic as an expression of two different cultures. As a student in Shanghai in the 1980's he was able to experience western art only in books, so the first thrill after arriving in America was the chance to see originals at the Museum of Modern Art in New York.

"This is so important to a young artist,” he explains."When you see original works, a dialogue develops between you and the art."

Today his work has developed beyond two dimensional paintings to sculpture, video and installation. In a series called "Chinese Chapter" he pairs up authentic antiquities dating back 5,000 years with new sculptures inspired by the forms of ancient vessels which he has crafted from brightly-colored silicone.

Zhang sees his present work as an integration of the many cultures that now affect his daily life and inspired by the two places where he lives---Shanghai and New York. 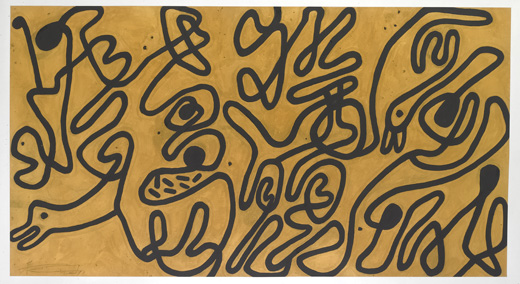 Wei Ligang is a prominent member of the post-modern calligraphy movement whose work has been shown in exhibitions in around the world and has been collected by the British Museum, the Museum of Fine Arts in Boston and Today Art Museum in Beijing.

His works range in size from one metre high to massive scrolls which span the interior of a three- story building. Inspired by the Qing Dynasty cursive calligrapher, Fu Shan, Wei Ligang deconstructs Chinese characters and renders abstract works that are full of power but largely illegible. Born in Datong, Shanxi Province in 1965, he studied calligraphy as a child and won many prizes for his work. He then pursued mathematics at Nankai University where he became part of the post-modern calligraphy movement that was emerging in the 1990s.

He received a grant from the Asian Cultural Council in 2006 to make his first trip abroad. His many activities included a meeting with American painter Brice Marden whose abstract paintings share a resemblance with Wei Ligang's calligraphy. Wei is now planning to organize a joint exhibition with Marden in Beijing. 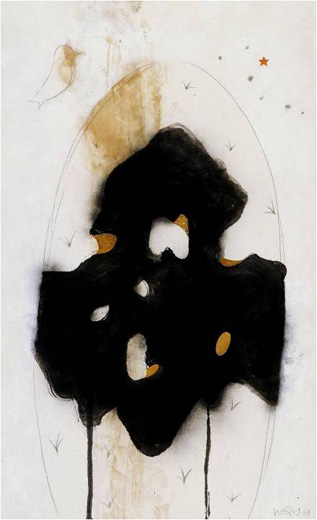 Experimental ink painter Wei Qingji was born in Qingdao and is currently teaching art in Guangzhou at Hua Nan Normal University. He did his early training in fine arts at Nankai University in Tianjin where he mastered the technique of Chinese ink painting and is committed to working in this medium to create a new interpretation.

"To be sure, we can never return to the past, nor can we express ourselves in the same way as before,” he explained in his studio in Beijing last month. “But history is important to knowing who we are. I am dedicated to making traditional media utter a new voice and making images and ideas relate to our everyday experience."

His work is characterized by modern icons such as Mickey Mouse and Spiderman which he paints with opaque ink to evoke an almost burlesque sense of the vulgar presented in a reverential manner. The awkward juxtaposition, which perhaps illustrates some of the incongruent side-effects of globalization, can make viewers squirm.

"I wouldn’t want everyone to like my work,” Wei explained. "That would mean that it was too pretty and accessible. Art is supposed to be a process which stimulates discussion. It is not a result or a product.''

The Asian Cultural Council is a non-profit organization which supports outstanding professionals in the visual and performing arts for programs of experiential education in the United States. The ACC has funded more than 6,000 individuals since its establishment in New York by John D. Rockefeller 3rd in 1963.

This exhibition marks the second collaboration between Alisan and the ACC.

In 1986, Alisan Fine Arts celebrated the Asian Cultural Council's opening launch in Hong Kong by organizing an exhibition by three distinguished painters who had received support from the ACC in the 1960's: Wucius Wong, Hon Chi Fun and Chuang Che.

"This experience usually has an enormous impact on an artist's work although it is not evident right away. It can take a lifetime for the results to appear. The ACC program reflects this kind of long-term vision."

The exhibition will be held concurrently at two locations until June 29: