Stephanie Wai Ting Cheung (recipient of the 2015 Altius Fellowship) is a curator, writer, and social practitioner whose work explores relationships in communities and how they can be imbued with compassion and imagination through artistic collaboration. In Hong Kong, Cheung serves as Lead Curator of Make a Difference Institute, which has initiated projects including “Tin Shui Collaborative”. In 2015, Cheung received an ACC fellowship to research projects and organizations across the U.S. that share her social practice aims. During the fellowship, Cheung has had an opportunity to experience socially engaged art initiatives that deal with critical social issues and come into close contact with the people at the center of these initiatives. In the following, Cheung sheds light on a few of her most unforgettable encounters.

Flying to New York with what I learnt from art history and high school literature, I was expecting an America living by principles ushered in by waves and waves of liberating movements, with Atticus Finch-like defenders of civil rights, and probably a critical mass revamping capitalism. Yes, these were there, but like any other place in the world, America has many sides. While I orientated myself in the midst of Midtown’s kaleidoscopic reflections, I have learnt to appreciate the endeavors of some all the more.

Telling it as it is: Seeing Stories in the Lower East Side and Tenderloin 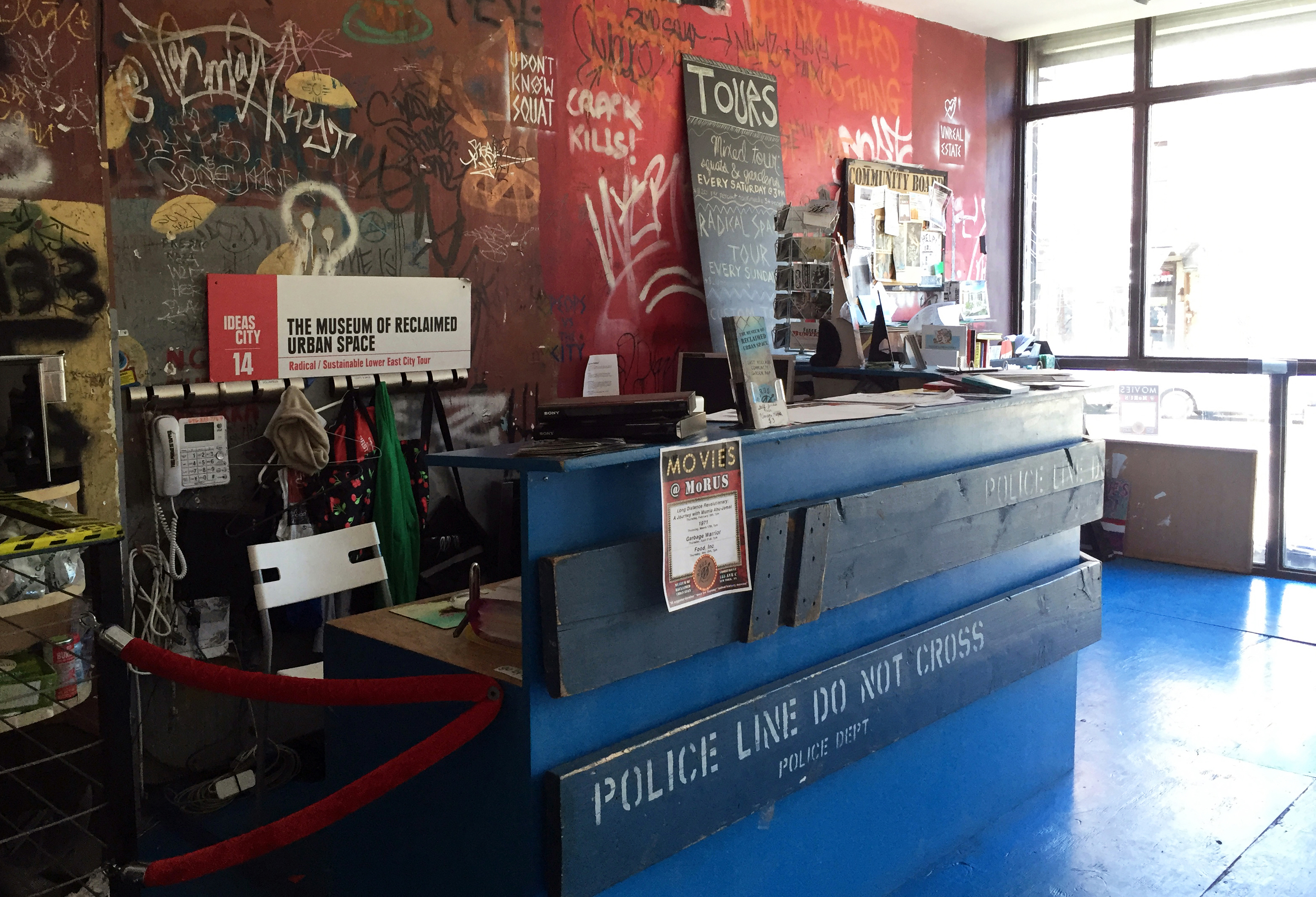 With an unmanned reception and straightforward exhibits about squatting and evictions, cycling, resistance against gentrification, and advocacies for urban gardens, the Museum of Reclaimed Urban Space (MoRUS) in Manhattan’s Lower East Side (LES) reminded me of Woofer Ten, a community art space striving to tackle similar issues in Hong Kong. Why would such an anarchistic space call itself a “museum”, as if it is an authoritative institution? My question was soon answered by Bill, my tour guide for a walk titled “Radical Spaces”: MoRUS was founded to encapsulate the area’s radical history and tell it in its own way.

The riots in Tompkins Square Park, the menace of red-lining and arson, squatters’ takeover of dilapidated buildings, community gardeners transforming rubble into soil, chickens roaming free inside a repurposed fence made from excess… Bill told me La Plaza Cultural was once surrounded by murals, on which “the struggle continues” was written in a good number of languages. We stopped in front of two surviving murals. They show historical anecdotes of people standing up against tyranny and greed, and rebuilding a brighter alternative through armed revolution as well as gentle actions of care.

Perhaps comparable to the LES a generation ago, before the aforementioned endeavors and subsequent gentrification, Tenderloin in downtown San Francisco is also seen by some as a neighborhood to be avoided. When I was wondering whether I was at the right place, Darryl called from the other side of the road. His cheerfully airbrushed truck was parked outside a lava red gate, entrance to the Tenderloin National Forest. The place was once a cesspool flooded with filth and illicit activities, but over the past 27 years since 1989, collaborators of the Luggage Store (an SF-based art collective Darryl co-founded) have transformed the unsightly alley into a community commons for art programming, and a mini forest celebrating both bio and cultural diversity. While cacti and redwood grow side-by-side, the cobbled floor honors the coexistence of cultures in this ethnically mixed concrete jungle. Entitled Cultural Geometry, it was handcrafted by Portuguese artist Rigo 23 and mason Jose Fernardo Cardoso, with assistance from students from the San Francisco Art Institute, and features motifs inspired by Ohlone basketry design.

I thought about social sculptor Shelley Sacks. Years ago, in a twilight-lit room in Oxford, she spoke about aesthetics as the opposite of anesthesia, and responsibility as the ability to respond.

“The Tenderloin National Forest” was a name proposed by a college student as part of an assignment for an in-situ class project. This “forest” is a creative ground for many – artists, craftspeople, botanists, chefs, accountants, community organizers, etc and also the city government (which supported the undertaking with a $1 per year lease and collaboratively contributed to its evolution). The latest addition is a masonry oven, a center of community nourishment in so many cultures. Upcoming plans include a canopy for channeling rainwater for irrigation during the Californian drought, and a shower at the back for people in need. “People in low-incoming housing can also enjoy a home with a view,” Darryl shared his vision. I thought about social sculptor Shelley Sacks. Years ago, in a twilight-lit room in Oxford, she spoke about aesthetics as the opposite of anesthesia, and responsibility as the ability to respond.

Sharing the Tastes of Struggle and Survival

When the People’s Kitchen Collective served spiced honey, umeboshi and fennel seeds as part of their Kitchen Remedies presented at “Crosslines” (a culture lab at the Smithsonian in Washington, D.C.), I chewed on the taste of struggle and survival, as aptly described by the group of multicultural artists from the Bay Area. The process-based installation was put together with kitchen cupboards, on which a variety of family remedies were displayed. Caption signs tell their stories. For instance, returning home for the first time in 40 years, a Japanese grandmother bought barrels of umeboshi for her family in Colombia; her grandchildren, never tasted a preserved plum before, were told that these were like gold and could only be eaten when they were very sick.

In the middle of savoring these heirloom remedies, visitors were invited to share their own. Like the free-range chickens in La Plaza Cultural and the many shades of green in Tenderloin, these exchanges on healing were so gentle, so responsive and so real. The artists write beautifully, “Food is where we meet, where we build… These ingredients hold stories about how our peoples have stayed through migrations, displacements, enslavements, rebellions and revolutions.”

The Bronx is Breathing: Gardening that Cultivates the Community

Back in New York, Roslisham Ismail (a.k.a. Ise), an ACC fellow from Malaysia, brought me to the Kelly Street Garden in the Bronx. Outside, a plaque puts a twist to the burning of the Bronx by declaring “The Bronx is Breathing”. The garden is run by residents committed to turning a once derelict backyard into a thriving community hub. Reinventing homes against the odds of disrepair, fires, food injustice and prejudice, these generous neighbors were kind enough to include me in their coffee conversations. I learned that the earliest block parties were held in rough times to crowd-source relief for the needy through the sharing of music and food.

Among these adorable residents, Sajata was bringing the neighborhood together for sustainable creation: making organic dyes from plants grown in the garden, and knitting eco-friendly wearables. The textile designer saw this as a proactive step for ushering in alternatives to excessive consumption. Once she took me to a co-op where she got peanut butter with a jar brought from home, and explained how she tried to minimize waste one plastic bag at a time. One morning, we dyed yarn with freshly harvested fennel. Light found its way in through the window when she held the olive-colored yarn on her palm.

Feeling the Aesthetics of Community Connection

My final stop was Project Row Houses (PRH) in Houston. Founded in 1993 in Third Ward, a historically African-American neighborhood, PRH is a long-running initiative that aims to preserve traditional row houses and what they represent: a safe haven where residents enjoy a fulfilling life. Uber drivers told me stories about the stigmatized neighborhood: its degeneration, gun violence, illicit trade… On a day-to-day basis, PRH is reinventing the place by carefully repairing each broken window, keeping the premises welcoming and safe, opening studios for art students to experience social practices, helping young mothers transition into their next stage… Art, sometimes formal, sometimes less visible, is a thread connecting all.

In meetings where participants discuss passionately and share work, there is a rigor in the kind of connective aesthetics that tackles real life… Knowing what it takes for the Project Row House to happen in context, when I saw mothers reading with their children on the porch, I found poetry in the air.

With gentrification and new developments at its doorsteps, PRH is bringing together stakeholders from all walks of lives — residents in the neighborhood, artists and cultural workers, people from non-profit organizations, religious establishments and business, government officials, etc — to think and work collaboratively for the future of Third Ward. In meetings where participants discuss passionately and share work, there is a rigor in the kind of connective aesthetics that tackles real life. Rick Lowe, Founding Director of PRH, has a theory of art that weaves together the practical and the poetic. Knowing what it takes for PRH to happen in context, when I saw mothers reading with their children on the porch, I found poetry in the air.