Coco Zhao is China’s foremost jazz vocalist who has created a unique form of jazz that combines Chinese and western styles. Born in Hunan and educated at the Wuhan Music Academy and the Shanghai Conservatory of Music, Mr. Zhao is a leading force in China’s jazz world and performs regularly with his group Possicobilities both in China and abroad. He was awarded an ACC fellowship in 2009 to spend several months in New Orleans and New York delving deeply into the African American roots of jazz and to meet with contemporary innovators of this art form.

Hong Kong International Jazz Festival: Coco Zhao will be performing with the Rusconi Trio on Sunday, October 2, 2011. More details can be found here.

Jazz in China? Somehow people do not usually connect these words together. But as far as we know, jazz first came to China in Shanghai back in the 1920s and 30s with the American Navy from the West. People can still envision the image of glamorous old Shanghai with a sassy diva in her Qipao dress singing in front of a marvelous big band. But jazz is more than just an imaginary scene today. Jazz has become a spirit, an art form which allows all kinds of musical languages, styles, genres, sounds and beats to mix together; a space where imaginations and creations can fly freely. 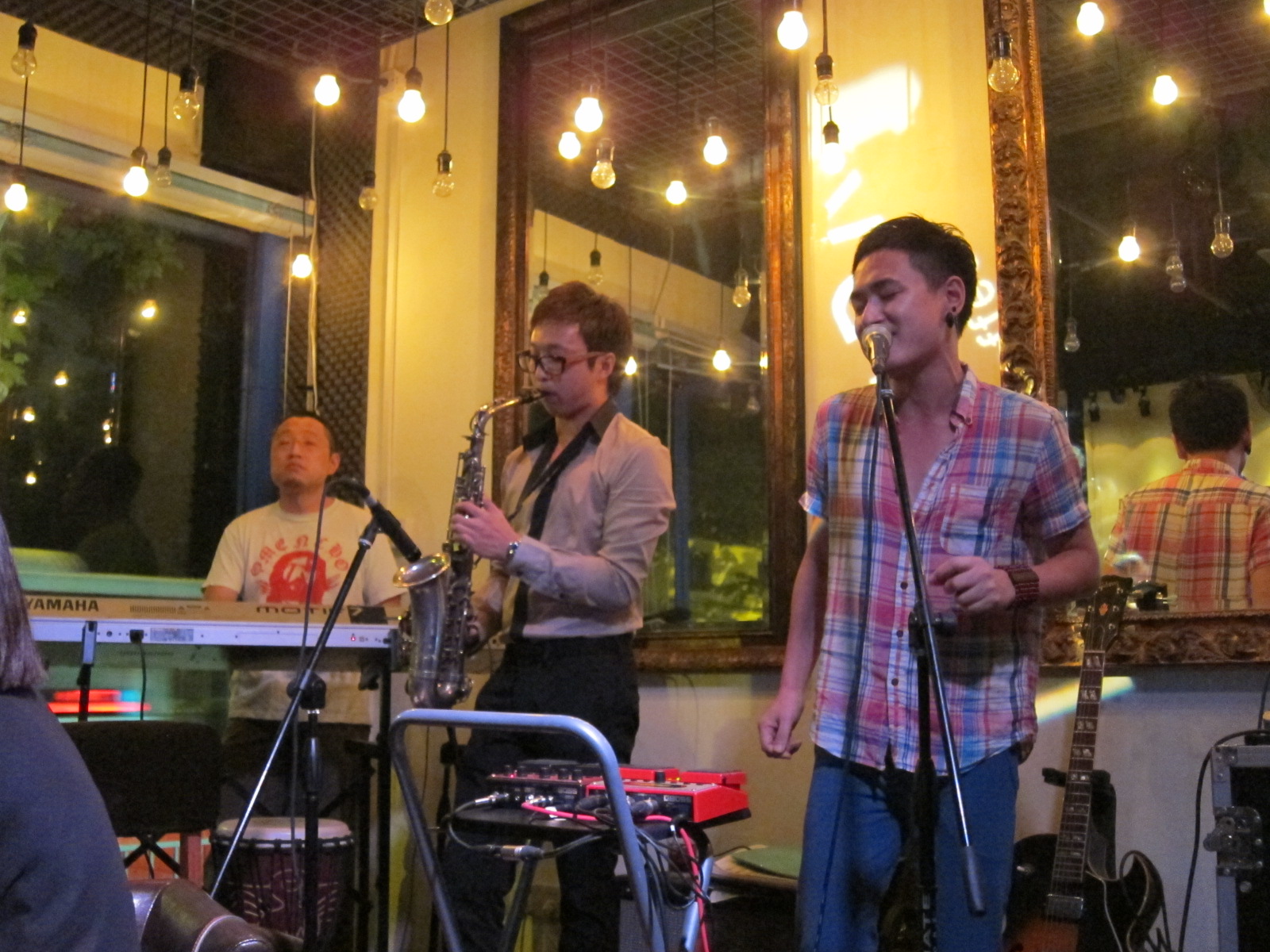 Coco (right) performing with his band at La Vida, Shanghai

Throughout the Cultural Revolution period, jazz was deeply asleep in China. It woke up in Beijing around the 1980s with saxophone player Liu Yuan. It then slowly came back to Shanghai around the 1990s with pianist He Le, Zhu Mang, and a few other cats... I couldn't resist the charm and the thrill of jazz either and joined on the journey of jazz around 1995. From blues to jazz, bebop to cool jazz, funk to fusion, avant-garde to experimental, from playing classic standards to re-arranging Chinese folk songs with jazz, then to original compositions, China has explored jazz's developments as fast as it could in the past 20 years. There are more and more jazz lovers, listeners and players in China every day, and the scene is getting bigger and better every day as well.

I remember back in the 1990s, we only had very limited resources for us to listen to and play jazz. We had to ask our friends to bring back all kinds of CDs, tapes and books from overseas so that we could read, listen and learn. Back then, jazz was still a new and unfamiliar word to most Chinese audiences. At the 1998 Shanghai International Jazz Festival, I tried to perform a mixture of old Chinese folk tunes with jazz, such as "Jasmine Flowers" and "The Dancing Golden Snake". The audience did not understand why I had changed so much of their familiar Chinese songs into something different – into something that they did not know how to understand. It seemed that all the fun improvised parts of jazz were something too much out of the order for them. After the concert, I was very confused and disappointed with my idea of making our own Chinese jazz. But a few days later, what Betty Carter (one of my favorite singers who passed away in 1999) told me guided me back to the right path, and strengthened my faith for jazz in China; when I told her that people were laughing at me when they heard me try to mix Chinese music elements into jazz, she said to me: "Only listen to your own heart, and never let others defeat your faith in what you do. Jazz is for everyone, and everyone can put their own thoughts and ideas into the music. Jazz is American, but jazz can be Chinese too!"

In the early 2000s, VCDs, DVDs, and the Internet's world wide connections made it more accessible for jazz musicians to study their art in China. There are now more and more jazz listeners and players. More and more foreign musicians now come to perform and even to live in China. Americans, French, German, Cuban, Mauritians, etc. Each of them have brought their own jazz language into China, and most of them generously share what they have with the local musicians. I have to give credit and my biggest thanks to these foreign musicians who have played and lived in China! Just like what Antonio Carlos Jobim wrote in his song “No More Blues", these foreign musicians really have shown and taught me that "home is where the heart is". And if we play and listen to music with our hearts, we are always in our home, sweet home! I remember many occasions where I jammed with foreign and local musicians in clubs and bars – our homes – and my heart would be filled with the joy of a new-born child. 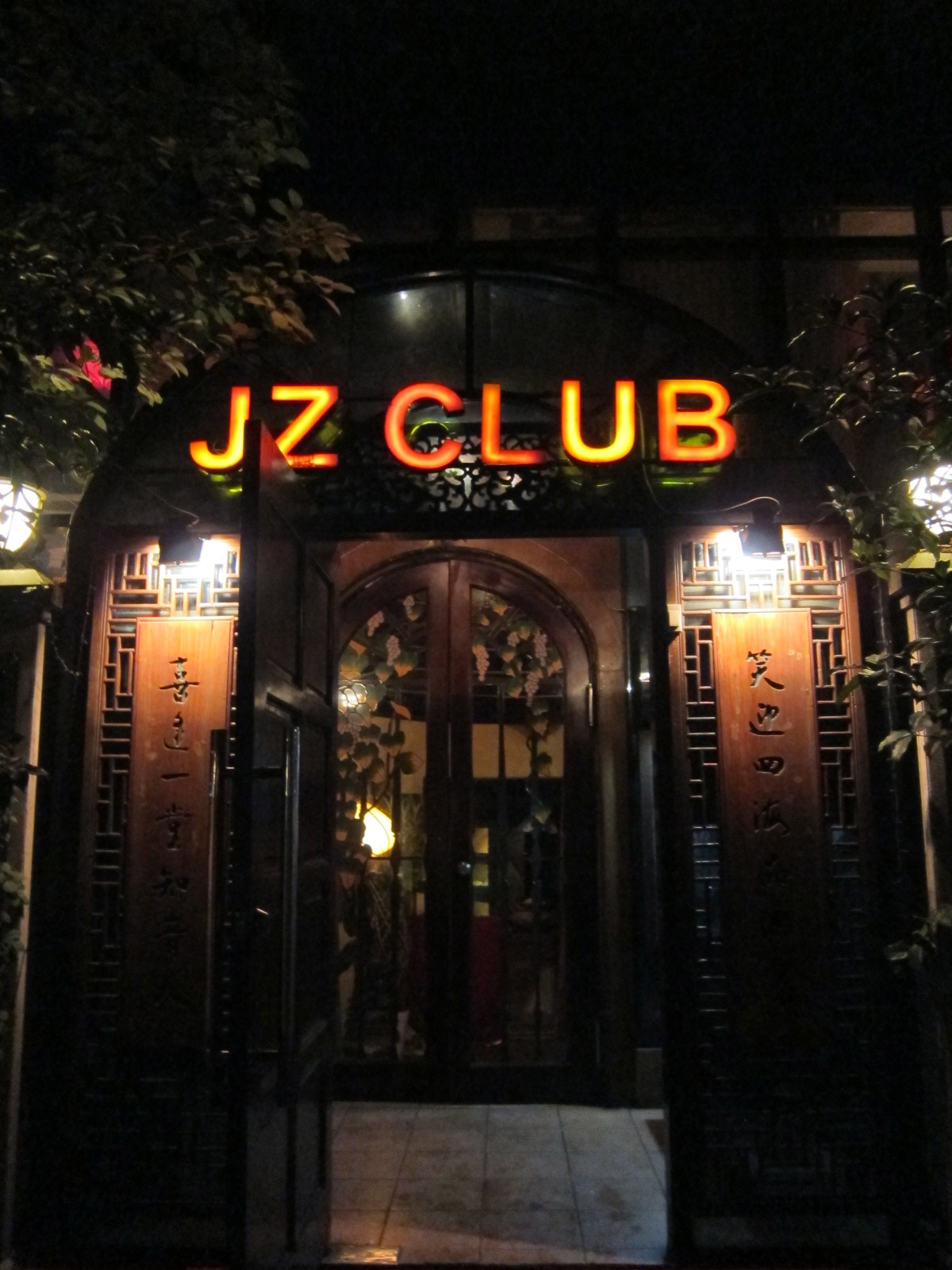 Exterior of the JZ Club in Shanghai

But of course, everything has its bright side and its dark side also. Whilst jazz music is happily making its home in China with all these foreign and local musicians, there is also misunderstanding from the audience. Many listeners still associate jazz with scenes from 1930s old Shanghai, and for them, jazz is probably just a way to display their social and financial positions. I remember that once I had to defend jazz music to a local news paper journalist, saying that jazz music does not equal five star hotels and that we should not use jazz to show off for whatever reasons. We should listen to jazz with our hearts and souls whether we are listening to it in our homes, concert halls, five star hotels, or in a smoky little club, or even on the street. But thankfully, we still have places like CD cafe in Beijing (and also East Shore cafe), JZ club and Cotton club in Shanghai where it is just as simple as it should be. Besides pure music and genuine feelings, there are no glamorous outfits. With these authentic musicians and music venues, jazz is growing bigger and bigger in China.

Jazz is branching out in cities like Beijing, Shanghai, Hong Kong, Shenzhen and Guangzhou, and also to smaller cities like Qingdao, Changsha, Chengdu, Kunming etc... Jazz is now increasingly widespread in China and introduced to the daily lives of Chinese people. The listeners need more music to listen to and the musicians need more stages and bigger venues to perform at. Jazz festivals are the best platform for both jazz players and listeners. The Nine Gate Festival in Beijing and JZ festival in Shanghai were established in 2006 and these two festivals have since provided tremendous support for the local jazz scene. It has allowed Chinese jazz more space to develop its own fate. At the same time, these festivals also invite world-class musicians for the listeners as well, such as Diana Reeves, DeeDee Bridgewater, Kenny Garrett, and McCoy Tyner. Today, cities like Beijing, Shanghai and Hong Kong, jazz and other music festivals have already become annual events for jazz and music lovers to get together to perform and to enjoy music. This trend has already spread out to other cities in China also such as Nanjing, Zhuhai, and Changsha which are hosting their own jazz festivals now as well. I believe there will be more and more jazz listeners and players in china if this jazz breeze will blow it's fragrance in the right direction.

However, even though jazz is much more accepted and understood in China nowadays as opposed to how it was 15 or 20 years ago, the variety of jazz music and its community is still not as diverse as it is in the West in places such as New York. In 2010, I was very lucky to be selected and awarded a grant by the Asian Cultural Council to go to the USA to search for the roots of jazz and to understand the place of jazz in today’s world. I spent 5 months in New York and other cities including New Orleans and San Francisco to listen and to perform with many amazing musicians there. I found that there were more than enough listeners of all different styles and genres of music in New York. Audiences there are very open-minded and open-hearted to all different kinds of new sounds. Chinese audiences are still on a journey of becoming more open, but the effort made to broaden our musical tastes by musicians and audiences in China will be useless without input from Chinese authorities and the local media. If Chinese television, radio, magazines and newspapers are only willing to play and promote commercial and easy listening music, then Chinese listeners will never be able to understand and accept new sounds. And the risk-taking and self-challenging musicians will never have their chance to let their music be heard across the country or even across the world.

But as China is getting more and more international, it will need more variety and depth in its art forms. As a risk-taking musician myself, I truly hope that the Chinese authorities and media will give more room to new sounds and new music. I have a saying: “Without good weather, planes would never be able to take off, no matter how good the planes are”. I hope that with the help of the Chinese authority, the effort of musicians and support of the listeners that jazz will take off and fly freely in its own Chinese way!

At last, I’d like to say that jazz has always been in China. Just like the classic Chinese folk tunes, Beijing operas and same as the classic jazz standards, they have been sung and played many times by different masters in different styles and in different times. Just like I’ve always said: we've got the blues in China too, and it's been here for long time already.

While the Asian Cultural Council (ACC)supports and encourages artistic expression, the views and opinions of our affiliated artists do not represent the ACC.