On the occasion of ART HK 12, the eminent visual artist Cai Guo-Qiang’s latest visit to Hong Kong included an informal talk at the ACC Hong Kong office on the afternoon of Friday, the 18th of May. Cai shared with a small group of ACC alumni, ACC HK Friends’ Committee members, and members of the local arts community the impact of his 1995 ACC fellowship on his career and presented a selection of his past and most recent projects, including a special work donated to ACC for a charity auction in October 2012.

“ACC has contributed greatly to the careers and development of many artists including myself”, Cai told the group. He received an ACC fellowship in 1995 at a time when artists from Asia were not freely able to travel and work in the United States. He was then living in Japan and he had represented Japan for biennials in Venice and Johannesburg before he received his fellowship. ACC enabled him to travel to New York and participate in a residency program at PS1. Cai enlivened the talk by sharing humorous personal anecdotes, such as how he had ‘inherited’ the cooking ingredients left behind by ACC grantee Takashi Murakami who was the previous occupant of his PS1 studio. He told of how he made a small mushroom cloud in his studio space with his five-year-old daughter and how ACC had assisted him in becoming the first Chinese citizen to gain entry to the Nevada nuclear testing site. 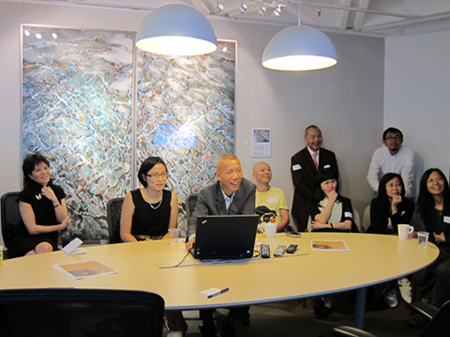 Cai also shared videos and photographs of his recent works as he explained the mechanics of his complex and large-scale projects, which often merge pyrotechnics and traditions from Asian culture, such as landscape paintings in ink. Though the spotlight is often cast on Cai alone, he strongly emphasized the collaborative element in his creative process. His project at the Museum of Fine Arts, Houston (MFAH) for example, involved numerous local volunteers who collaborated with him on a gunpowder drawing named Odyssey (2010) that is now on permanent display at the museum’s Arts of China Gallery. For his recent solo exhibition titled Saraab (2011) which was held at Mathaf: Arab Museum of Modern Art in Doha, Cai also involved local volunteers to realize his monumental pieces which merged different cultural elements he had observed in the Arab world with cultural motifs from his hometown of Quanzhou in China. 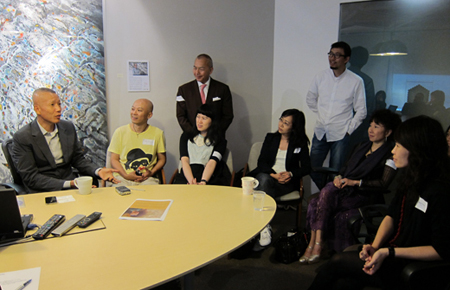 Questions from the guests led to a discussion about various topics such as influences on his work which include Asian ideologies, his belief in the existence of alien life, and memories of his upbringing in China. In amidst his memories, he recalled the popular images of Marxist leaders that were constant fixtures in his childhood and which have now become the subject of a special work that he is donating to ACC for a charity auction to help fund future ACC grantees. A whimsical gunpowder drawing of Karl Marx, the work is titled Marx’s Moustache and will be auctioned by Sotheby’s Hong Kong in October 2012. “I have always wanted to create a work like this, and ACC has presented me with the right opportunity to donate this work and help other young artists,” said Cai. “With the rise of the Asian economy, more established artists should give back to ACC. I am hoping to set an example for other established ACC alumni to do the same.”

Cai concluded the talk by sharing some of the difficulties that he had encountered in realizing his works around the world. One guest asked whether he had been invited to create a pyrotechnic work in Hong Kong and Cai responded, “Hong Kong people are far too smart to do that. They know how difficult it is so they probably would rather not contact me!” Nevertheless, Cai did reveal his desire to create a work in Hong Kong and so it may not be too long before we see his explosion art over our city’s skyline.