"Zen and The City: The Photography of John Fung" by Benny Chia

The "One Square Foot" Charity Art Exhibition is currently on show at the ACC Hong Kong office. All works are on sale until January 6th, 2012 and funds go towards the Arts with the Disabled Association Hong Kong to support visually-impaired musicians. Viewings are by appointment only. Please contact us at: 2895-0407

On his return from his first visit to the United States as an ACC grantee in 1988, John Fung (known to his friends as Dongdong) showed a series of photos that was memorable to this day for its theatricality, humor and observation. They were photos taken of people, at eye level, in the streets, on public transport, and in restaurants, which captured transient yet meaningful moments in life. 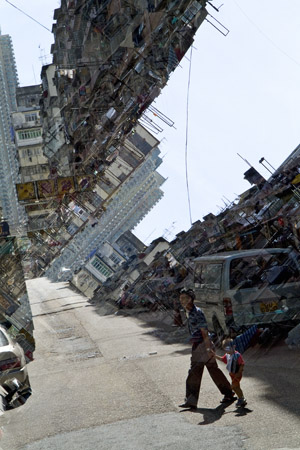 At that time John shot in black and white film using a single lens reflex camera, and sporting a head of bouncy black hair. Now his hair has turned silver and his camera digital. Instead of leveling his lenses when he shoots, he points them skywards. He has also turned to color photography, and become adventurous with it in his irreverent yet thoughtful way.

He would go to great lengths to make a point. A fellow photographer, having looked at some of his work now shown, asked him dismissively why he bothered with the double exposure effects whilst he could have done them with Photoshop. (N.B. None of his photos have been Photoshopped.)

He pondered on this question as one does on life's own mysteries. "The difference finally is in the doing," John explains. "One is done with the camera. The other, with a computer. One is done in the moment. The other, out of it." 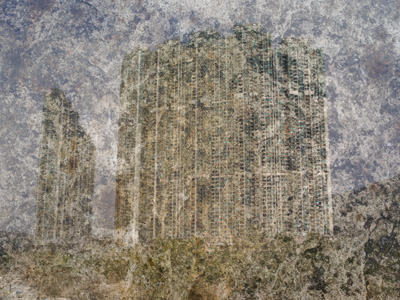 The "in-the-moment" moments are key to understanding the messages John has put between layers of detail in his composition. They are images subtly placed which the viewer has to look for: a hint of the moon here, or a face looking out of the window there. He seeks out and takes pleasure in these complicit moments when the viewer is sharing something with his creative invention.

With maturity and mastery of technique, he admits that the know-how acquired in making his shots has, in effect, limited the options available to him. "What an irony! That's life for you. But it's not going to stop me from making the best with what there is."

Someone has said that a man without imagination has no wings. Here John has given the viewer wings. Enjoy the flight!

John Fung Kin Chung has earned widespread acclaim for his One Square Foot series (2006), in which he addressed the environmental and spatial problems of Hong Kong, one of the most congested cities in the world.

Born in Madagascar, Africa, John moved back to Asia with his family at the age of 13 and was educated in Macau. He eventually settled in Hong Kong where he had a number of jobs including photo-journalist, starring in a film, working on construction sites, opening restaurants and making lamps, but all along he never put down his camera.

In the 1980s, John Fung held four photographic exhibitions: Germs, Cocoon, Ten Years On, and On the Road. In 1988, he received a fellowship grant from the Asian Cultural Cuoncil to study in New York City. After his return to Hong Kong in 1989, John worked as a documentary photographer for Next Magazine and Ming Pao Weekly Magazine until 2004. In 2005, he was invited by Oxfam Hong Kong as a volunteer photographer to document areas which had been devastated by the 2004 tsunami, travelling to Africa and Southeast Asia. He continues to participate in voluntary work for non-profit organizations.

John Fung now works as a full-time artist in Hong Kong. In April 2009, he was one of the Hong Kong artists selected for Sotheby's Sale of Contemporary Asian Art in Hong Kong.